Play 2nd World War as if you really were there 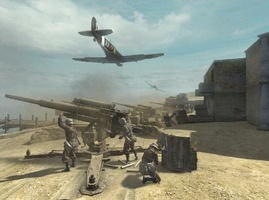 Advertisement
Call of Duty 2’s campaign will put you in the shoes of a few different soldiers fighting for different Allied factions.

You start off as a private in the Russian army and after that we will play several rols, for most of these missions you’ll be fighting in the sand-swept deserts of North Africa alongside the Desert Rats against Field Marshal Rommel’s troops. The final mission in the British campaign sends you to the bombed-out houses and hedgerows of Caen, France. And finally you’ll play as an American doing a D-Day landing, but not on Omaha Beach, you’ll be scaling the sheer cliffs of Pointe du Hoc as artillery with the Army Rangers.try rock climbing with artillery and machine-gun fire raining down on you. Simply great.

This time playing according to our partners is going to be a must if we want to survive. Massive amounts of infantry can populate the battlefield and they will be both partners and enemies.

With a new graphic engine, we soon realise the high quailty details of a game that fight for the throne of war games.
Reviewed by Álvaro Toledo
Advertisement

cod 2 is the first ww2 fps game that went down in history as a revolutionary and there are many innovations, for example, auto life boost in bf1 is in this game. tşk

The game is good but since it is the free version, only the first mission comes, so I give it four stars

one question this game is for laptop

One question, who helps me download the full game?

Similar to Call of Duty 2